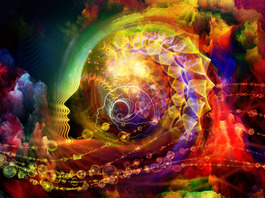 It is through our connection to Light that we *see* beyond our visible world and beyond what the physical world reveals. By accessing this wisdom of Light, we remember that we are not as limited as we have been taught. In fact, we are full of divine grace and power. A daily practice of tuning into this vast potential opens the door through which we can reclaim our true identity, answering the calling to live our full potential.  We no longer live in a predictable world and as we reawaken to Truth during this time of great change, we must access our own inner light to survive as we shift into a new level of consciousness. We must firmly trust our own inner discernment and not be led away from our own Truth.  With rapid change around us, we must trust our own ability to sense what is happening and how we can best respond. Accessing the information that will help us navigate these uncertain waters resides in our own awareness of ourselves as Beings of Light… and the processes of alchemy and energy.
A natural intuitive empath, Jennifer physically feels and works with the energy of people and places. As a highly sensitive child, she easily absorbed the energy of others and was overly-affected by the energy held in environments. Through years of training and her personal experience with both the challenges and strengths of being "energy sensitive", Jennifer transformed her sensitivity into the power to work with these energies on a very high level, to give you meaningful tools you can put to immediate use in life.﻿﻿﻿

Character Structures
Another belief is that many of our problems stem from defenses we picked up as children. They're known as character defense structures. Brennan identifies 5 different defense structures. The names for some of these structures come from psychiatric terminology, but their meanings here are very different from their traditional ones.
​​Chakras
Most of the healing techniques involve laying on hands directly over chakra points. These are the same traditional locations used in other forms of healing. Ms. Brennan identifies specific illness issues with blockages or over-spilling from one chakra or another. The goal, according to her method, is to have each chakra sending out energy in a smooth steady spiral. According to the theory, if not enough or too much energy leaves a chakra point, the problem is manifested physically as an ailment or discomfort.

The earliest defense to be developed, these children supposedly felt rejected or uncomfortable with the universe from birth. They don't like being here and often "escape" through daydreaming or just spacing out. Energetically, they're very separated from their physical bodies -- often leaving their bodies energetically -- and may resent or feel hostile towards physical reality.
The person with predominantly Schizoid Character Structure:

The oral character developed their defense during the period when they were totally dependent on their mother; the breastfeeding stage. At some point they are either abandoned by their parents or feel that they don't get enough physical or emotional nourishment. The belief of the oral is that they never have enough. Oral people tend to be thin and to jut out their heads. Energetically,  orals to try to pull energy from other people because they believe they don't have enough of their own.
The person with predominantly Oral Character Structure:

The psychopathic defense is developed somewhat later in childhood and reflects a belief that aggression is the only way to get what they want. Psychopathic character types tend to have lots of muscular development, particularly in their upper body -- a "jock" provides a good stereotype. Energetically, psychopaths send large arrows of energy up from their body and down onto whomever they're trying to intimidate.
The person with predominantly Psychopathic Character Structure:

The masochist defense is developed in an environment where the parents were domineering and gave love in a conditional way. Guilt, shame, and passive-aggressive techniques were all used by the parents to control the child. The masochist character responds by withholding their love and themselves from others. They complain and focus on the negative sides of things. They tend to carry a lot of weight around -- literally and figuratively: stored fat is seen as a sign of masochistic tendencies. Energetically, the masochist sends out tendrils of negative energy that pierce the energy field of others.
The person with a predominantly Masochist Character Structure:

The child feels that their creativity (sexuality) is rejected by the parent. They get the message early on that their unique qualities are not welcomed. They develop a rigid posture and suppress their emotions and feelings. The rigid personality is obsessed with being genuine and constantly fears that they are not. The rigid body type is reflected in a board straight posture. Although they often seem more balanced than the other character types, they are not letting out their feelings. Energetically, their energies remain hovering at the edge of their field while their core or true essence remains suppressed.

The person with a predominantly Rigid Character Structure
TIPS AND TRICKS:

The show is recorded as we broadcast. When the broadcast goes off the air (online) at the top of the hour you can no longer hear the show, but often it goes overtime. If you want to hear the entire show you have to call into the show call in line at (805) 830-8344 BEFORE THE TOP OF THE HOUR.

HELP GET THE SHOW RECOGNIZED

﻿
.... If you missed the last Alchemy and Energy episode
you can find it here on the list of all our recent Shows (including other guests)
​or simply go to the On-Demand tab at the top of this page

Jennifer Boose's shows and interviews are not intended to diagnose, treat, cure, mitigate or prevent disease. If you have a disease or medical condition, consult with your physician or health practitioner before using any one of the systems or alternative therapies mentioned. Charlotte View and Jennifer Boose provide all information solely for educational purposes and the opinions expressed during the interviews are also covered by the following  Disclaimer in our website